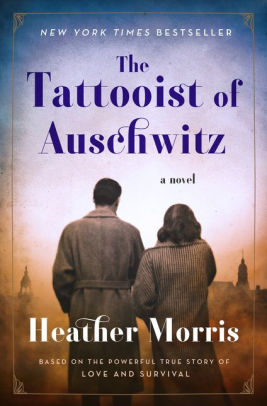 The Tattooist of Auschwitz by Heather Morris is a WWII novel that follows the true-story of Lale Sokolov. Lale is living in Slovakia when the government mandates that every Jewish family hand over a child above the age of eighteen to work for the Germans. Lale finds himself on a train intended for cattle, to a destination unknown. When the train finally stops, Lale finds himself in front of a metal gate: ARBEIT MACHT FREI. The large gate belongs to Auschwitz, the notorious concentration camp in Poland. Immediately, he and the other prisoners are put through inspection and corralled into a line. When Lale gets to the front of the line, the numbers 32407 are forcibly tattooed onto his left arm before he even understands what's happening.

He starts his time at the camp doing hard labor, laying roofs on new housing blocks. He quickly falls ill with typhus and is cared for by Pepan, who recruits Lale to become his assistant. Before long, Lale is in a new role, the Tätowierer of Auschwitz and Birkenau. As the Tätowierer, he finds himself allowed access to more luxuries within the camp, which he uses to help the other prisoners; the only way he can live with the fact that he is now defiling the arms of others. When the newest group of prisoners arrives for their numbers, Lale locks eyes with a terrified young woman as he tattoos the numbers 34902 onto her left arm. Something within Lale is ignited and he vows that he will do whatever it takes to survive Auschwitz and have a life with her.

This is one of the most powerful books I have read in a long time. It beautifully depicts the strength of love and the will the human spirit has to endure despite suffering imaginable atrocities. This novel is a true story, based off of the real life of Lale Sokolov, who Heather Morris met with over a three year period while learning his story. He never spoke about his time at Auschwitz until near the end of his life, for fear of being tried as a Nazi conspirator in his role as Tätowierer. It is heartbreaking and revolting to read about the heinous acts Lale and the others suffered, but hearing his story is so incredibly important. Even if you have read 100 books about the Holocaust, you need to read this one.

Want to read this title next? Get your copy below: