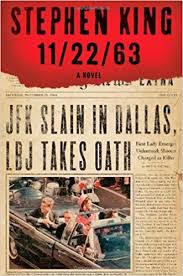 11/22/63 by Stephen King is a historical fiction novel that features main character Jake Epping faced with a predicament when he finds himself transported back in time. The novel starts in present day 2011 where Jake is a teacher. He has an adult student Harry, who suffers from some delays. When Harry writes an essay for Jake's class, Jake learns that Harry suffered a traumatic injury when his father attacked him and the rest of his family causing irreparable damage.

One day when Jake is eating at one of the local restaurants Al's Diner, Al suddenly looks very ill and worn. When Jake questions him about it, Al informs him that there is a portal located in his pantry. Jake, unable to grasp what he is saying, goes into the pantry himself and finds himself walking down an invisible staircase that leads him to September 1958. Jake explores a little bit and then returns back through the portal to Al's Diner where he questions Al.

Al informs him that he has made many trips to 1958 but now that he is suffering from lung cancer he wants to pass the knowledge of the portal onto someone else. After Al's time exploring in 1958, he tells Jake that every time he returns to 2011 only two minutes have elapsed and each time he goes back to 1958 it is a complete reset. Al then tells Jake that he has bigger plans for the portal and he needs his help.

After testing out the butterfly effect, (how one small change in history can lead to a series of changes in the future) Al tells Jake he plans to stop the assassination of JFK but needs Jake's help to do it. Jake is hesitant at first but then realizes maybe he can use this portal to stop the horror that happened to Harry and his family too. Jake agrees to help Al with his master plan and Al starts preparing him with the time he has left.

Jake again steps into September of 1958 with his plan to stop the assassination. But that doesn't happen until November of 1963 and a lot can happen in five years. The book follows Jake on his journey through time and asks the question if we could go back and change the past, should we?

I overall really liked this book as a whole. It's a BIG book for sure and certainly a commitment. I had the Mass Market paperback that was almost 1100 pages and also listened to a lot of it on audio where the whole book was over 30 hours. I was intimidated at first but it really is a very easy book to read and you get drawn in pretty easily. I was able to track right along with the book without any problems. Parts of this book did definitely drag on for me. I expected more of it to focus solely on saving JFK (which it does) but really the story is less about saving JFK and more about Jake Epping's journey. If you approach it from that perspective, the parts that seem unnecessarily descriptive make more sense. I understood why the book ended the way it did and it was somewhat satisfying. As someone who likes when books come full circle this one certainly does but I wished it had ended a little differently after investing so much time with these characters.

This was my first Stephen King book and I can assure you it really has no elements of horror. This is more of a historical fiction novel and if you like the history of the 1950s and 1960s I think you will enjoy it as there is a ton of historical research presented here. If you are a big Stephen King fan you will also find small nods to some of his other works in here, which is kind of cheeky and unexpected but very cool.

Want to read this title next? Click below to get your copy: